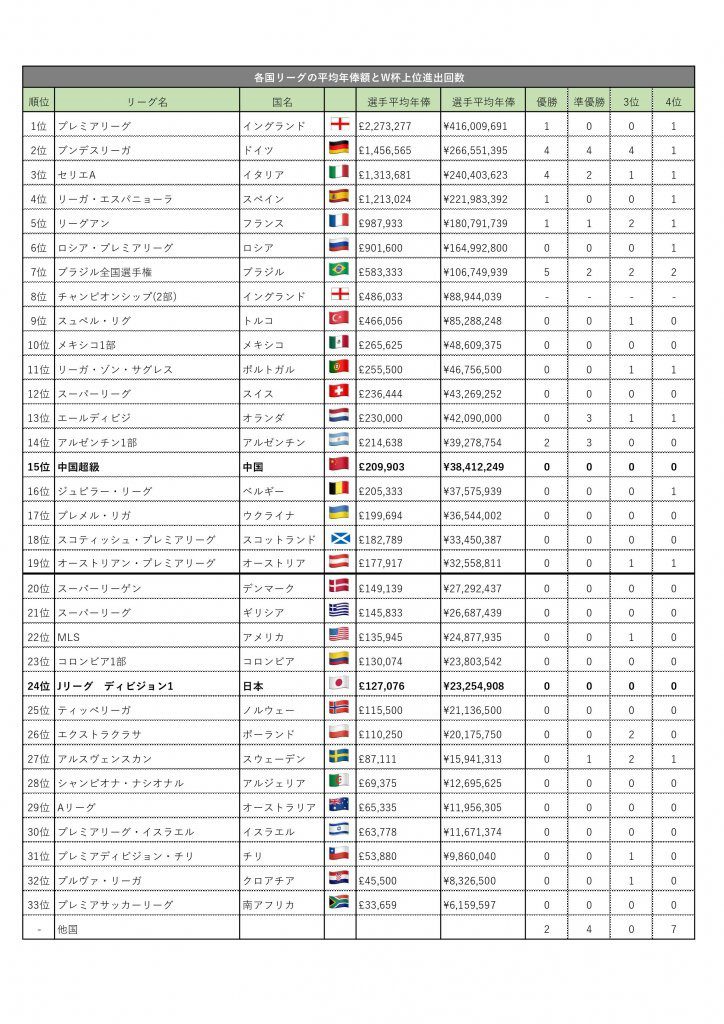 If the average annual income of the J-league becomes 40 million yen or more, will winning the World Cup become possible?

English tabloid newspaper “The Daily Mail” published a ranking from the leagues allover the world of football players average annual salary divided by country. Kids everywhere are yearning for this job, but there is a vast gap between the salaries of different countries. First of all, lets have a look at the top 5 countries of the world and then the top 3 countries of Asia.

After all, the top 5 is made up of “the 5 major leagues of Europe”. One major source of income is the broadcasting rights and their sudden price jump. If we look down a bit in the rankings and exclude the European leagues, we find Brazil with the highest average annual salary, holding 7th position with an average annual income for the players of about 100 million yen.

Is the national team also strong in the countries with a high average annual income?

If we compare the results in the World Cup of the past 20 tournament it would be clear that the average annual income and the performance are closely related. The countries with an average income of approx. 40 million yen or more (until 14th position, Argentina) have come up victorious in 18 of those tournaments. The exception is only Uruguay, winners of the 1st and the 4th World Cup. Since the 1954 5th World Cup in Switzerland (with the present system of a qualification and final group stage), said teams with a league where the average annual income is approx. 40 million and more have been winning the cup in 100% of the cases.
Furthermore, if we look at the runner ups and analyze their results as well, after all with a likelihood of 80 percent the chances of that applying here as well are high. As an opinion, it’d surely be possible to state “the country having higher average annual income in the league have a higher tendency to advance to a higher position”.

Will the day come when the Asian countries can win the World Cup?

In recent years, it is being told that the national teams of the Asian countries have been rapidly progressing but after South Korea reached the top 4 in the 2002 FIFA World Cup 2002 held in Japan and Korea, there haven’t really been any noticeable performances.
On the other hand, based on the average player annual income, the Chinese Super League have just one step in front of them in reaching the World Cup winning level at approx. 38.4 million yen (15th position). After undergoing a grueling qualification to this Asian Cup, expectations a very low. However, from now on after making a solid ground to stand on with abundant investments, putting the country’s pride at stake with these measures, training, strengthening of the system etc, at the very least numbers-wise they ought to become the most likely winner of the Asian Cup. Right now China is in the middle of a national project similar to that of the gymnastics or table tennis events of the Olympics but whether they will be able to conquer the world of football on the international stage remains to be seen…

For Japan to win the World Cup

At present, it has been published that the average annual income of the J-league players is approx. 23 million yen (24th position, only counting J1). There is still a gap of about 17 million yen up to the line of World Cup winning country. Due to the big deal with Perform Group (Dazn) concerning broadcasting rights (10 years approx. 210 billion yen), compared to the previous year the revenue stemming from broadcasting rights increased by 16 billion yen. Even so, in order to to make the average annual income of the players in the J-league more than 40 million, there still needs to be an expansion in all areas including entrance fees, advertisements, selling team goods, transfeer fees, price money etc.
“An average annual income for the players in the J-League = winning the World Cup” is of course nothing more than a mere numerical index taken from one angle, if looking at various countries out in the world there are many countries which are far more than Japan treating football as a business.
Since the beginning of the J-league it has been 25 years. During that time clubs have become professionalized, players turned professional, managers and coaches were granted licences and became professional. In the future it’s going to be desirable with professional man power turning out in great numbers not only in the competitive side but also in management. When both the wheels on the competitive side and the managerial side are turning, the day may come when the World Cup trophy will be held by Japan, may it not?